Tony Cairoli winner of the MXGP class in Maggiora!

The legendary track of Maggiora welcomed the seventieth edition of the Grand Prix of the Nations, in a blaze of unleashed fans coming from allover Europe, in a magnificent two days races choreography. 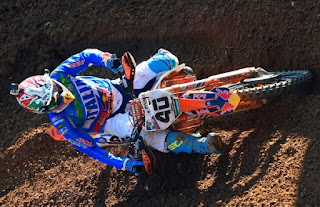 Antonio Cairoli, at his eleventh year with the Italian colors, gave as usual his 100%, to bring together with the team mates Michele Cervellin (Open-Honda) and Samuele Bernardini (MX2-TM), the highest possible position in the final standings. After a good free practice session, finished in fourth position, Tony had a perfect start in the qualification heat, taking the lead till three laps to the end, when a violent crash put him on the ground. Luckily the big gap gained in the previous laps, let him end in second place, contributing at the fifth place of Italy. 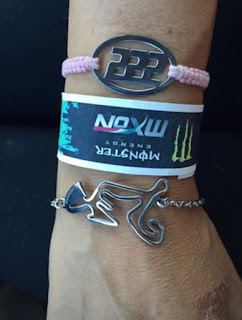 Sunday, in the first moto, where he was facing the MX2 category, Cairoli came well out of the gate, just behind his team mate Coldenhoff, that he passed three laps later. Antonio fought with the aftereffects of Saturday’s crash, taking even the lead for one lap and crossing the finish line with his KTM 450 SX-F in second place. In the third race of the Grand Prix, the KTM Red Bull Factory Racing Team rider had to face the Open category riders and he made another good start, becoming rapidly second, position which he held till the end. With two second places Tony win again the individual MXGP class race of the Grand Prix of the Nations, hitting another great personal success, contributing to the final fifth place of the Italian Team. Now the 2016 season of the Motocross is over and the next race will be in four month. 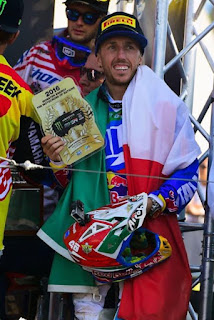 Antonio Cairoli: “The weekend started perfectly yesterday, I was leading the qualification heat with good confidence but then I hit the ground pretty hard and this morning when I wake up I was really sore and painful everywhere and I didn't feel ready to race. I heat my head, my shoulder and my leg but then actually I rode well, the pace was there, I just miss some minutes on the bike that should be there because I was closing the gap with the lead in both moto but it was just not enough but even if I win it was not changing anything to Italy. Ride in front of this crowds today was a great emotion and even if we have been far from the podium I’m happy about the commitment of all the team, giving their best.”
Etichette: Maggiora motocross of nations mxon Tony Cairoli