The eighth round of the 2019 season of the MXGP, the Grand Prix of Russia, took place this weekend on the fast track Orlyonok, for the third consecutive year. 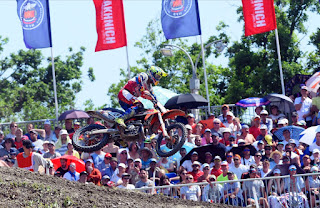 Tony Cairoli, after the difficult French GP, arrived in Russia well motivated to do well on a track didn't suit a lot to him. Tenth at the end of the free practice, the Sicilian seized the fifth gate for the qualifying race, at the end of a positive timed session. Started well at Saturday's race, Tony found an excellent pace and good trajectories during the heat, recovering positions and setting the fastest lap of the race, before haven an hard crash that left him breathless on the ground. Unable to continue, Cairoli took the pits, being forced to start from the twenty-fifth gate in the two Sunday's heats. Sore and painful the nine-time World Champion has lined up aware of not being able to aim for the victory but determined to fight to bring home as many points as possible. The KTM RedBull Factory Racing Team rider got a good start at race one but was touched by an opponent, thus passing the first corner out of the twenty, being forced to a comeback race, made difficult by the hard, slippery and single trajectory track, ending in twelfth position. The second start of the day was better and TC222 passed the first corner close to the top ten, launching in pursuit of the rivals with his KTM 450 SX-F and reassembling to the fourth final place, with a great race. At the end of the eighth round of the 2019 Motocross FIM World Championship, Cairoli is second at 13 points from the top of the standings, with 10 more Grand Prix to go. 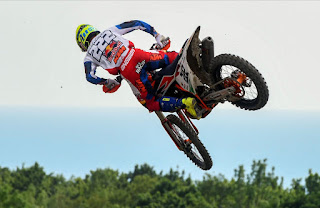 Antonio Cairoli: “A very difficult weekend and of course the crash from yesterday did not help as it meant I was totally on the outside for the gate pick. I was riding very stiff and by missing the start it is almost impossible to make a good result on this track; everybody is riding at a similar speed. We lost the red plate but the positive is that I’m not badly injured, and we saw some big crashes today. We walk away a bit banged-up but we will re-group and look to Latvia, which is a nice track, and to regain some points.”
MXGP Race 1
1-T.Gajser 2-A.Tonus 3-R.Febvre 4-J.Herlings 12-A.Cairoli
MXGP Race 2
1-T.Gajser 2-A.Tonus 3-J.Seewer 4-A.Cairoli 5-J.Lieber
MXGP Grand Prix
1-T.Gajser 50p. 2-A.Tonus 44p. 3-J.Seewer 38p. 4-J.Herlings 33p. 8-A.Cairoli 27p.
MXGP Standings
1-T.Gajser 351p. 1-A.Cairoli 338p. 3-G.Paulin 231p. 4-J.Seewer 220p. 5-A.Jasikonis 212p.