The ninth round of the 2019 season took place this weekend on the sandy track of Kegums, which hosted it’s tenth Grand Prix since we first raced here back in 2009. 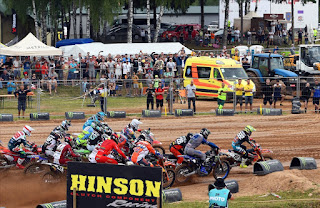 Tony Cairoli arrived in Latvia with some physical issues as a consequence of the bad crash he suffered in Russia last week, a lack of strength in his arm and some pain in his back which didn’t make his weekend easy. To exacerbate an already difficult situation, Tony woke up Saturday morning with fever, but although exhausted he still managed to complete the two practice sessions and the qualifying race, ending in twelfth position and taking a decent gate pick for Sunday’s motos. After a good night’s sleep and a positive warm up, in which Cairoli found a better feeling with both his body and the track, the KTM Red Bull Factory Racing Team rider had a very good jump out of the gate in the first moto, taking the lead in the first corner, staying at the head of the heat for five laps before crossing the finish line in third place after fighting against pain and tiredness right up until the last corner. The second start was again good but another rider pushed him from the inside, forcing him right to the outside, passing the second corner in around seventh place before recovering to fourth during the first lap. Unfortunately during the second lap, due to his lack of strength, Tony lost control of his KTM 450 SX-F, crashing hard on the Latvian sand and dislocating his right shoulder in the process. After some medical examinations, the doctors reduced the dislocation and Cairoli was able to return to his team and will be back home tomorrow for a few more medical checks, before deciding whether to ride or not in the next round of the MXGP 2019 in Germany next week. The nine time World Champion is currently second in the standings, 33 points from the lead. 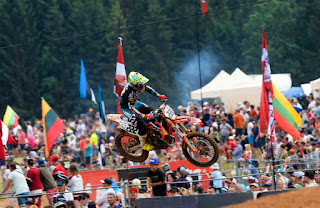 Antonio Cairoli: "On Saturday I had the Flu and a fever, and my arm was not as strong as I wanted after the crash in Russia. I could battle with the guys for first position in the first moto but then I got a bit tired and settled for third, which was good for the championship. In the second moto I was fourth and trying to follow [Arnaud] Tonus. I had quite a big crash and when I stood up I felt my shoulder was out. My hope is to be ready to at least start next week in Germany. I don't want to give up at all and I want to be there as much as possible for the championship."
MXGP Race 1
1-J.Herlings 2-A.Tonus 3-A.Cairoli 4-R.Febvre 5-J.Seewer
MXGP Race 2
1-T.Gajser 2-R.Febvre 3-J.Seewer 4-A.Tonus DNF-A.Cairoli
MXGP Grand Prix
1-T.Gajser 40p. 2-R.Febvre 40p. 3-A.Tonus 40p. 4-J.Seewer 36p. 11-A.Cairoli 20p.
MXGP Standings
1-T.Gajser 391p. 1-A.Cairoli 358p. 3-J.Seewer 256p. 4-G.Paulin 254p. 5-A.Tonus 246p.