The Portuguese round of the MXGP was today hosted at Agueda, 100 km south of Porto city. On the Monday following the GP of Trentino the forecast was that of rain for the entire week, and so it was right up to Friday morning. 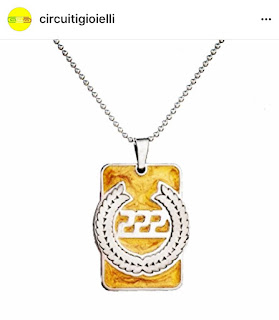 The organisers worked tirelessly and through their hard work and efforts the riders were given a very technical and smooth track. After grabbing the hole-shot Tony finished second in the qualifying moto, picking a good gate for the two races of the GP. Unexpected rain during the night meant the riders were faced with deep ruts and bumps in the red soil come Sunday’s GP’s. Armed with his KTM 450 SX-F Cairoli took a good start in both heats but in race one he lost some positions after contact with another rider, before having a stone smash his goggles and damage his eye quite badly. The KTM Red Bull Factory Racing Team rider gave everything he had, recovering from outside of the top 10 to a fantastic second place. The second start went well again but this time TC222 pulled away followed only by fellow brand mate Herlings who passed him for the lead at the second lap. Even with the eye’s problem Tony managed to take back home a solid 2-2, for second overall, his fifth podium of the season and 150th of his career. The sixth round of the MXGP 2018 will be hosted in Russia in two weeks time on the Orlyonok motocross track. 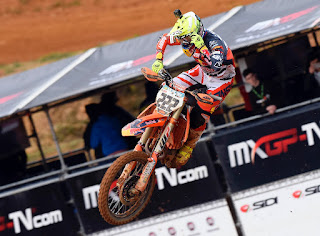 Antonio Cairoli: “In today’s first moto I got a good jump out of the gate but at the first corner I made a mistake, I went a little bit too wide and at the second corner somebody hit me on the inside and I lost a few positions going down to tenth and then after that I stalled the bike in some ruts and I lost even more places. As if it wasn’t going bad enough I then got a stone in my face that broke my goggles making it difficult for me to pass at the beginning of the race. Thankfully I found some good lines that were out of the ruts and I could pass many riders quickly, which in effect saved my race as I ended in second place, something I’m really happy with. In the second moto my start was perfect, and I put in some good laps at the front, before I started to feel my eye going a bit strange. Basically it was swelling up and pushing on my goggles after the trouble in the first moto, and it was affecting my sight. I was losing focus, made some little mistakes and Jeffrey passed me. I saw him crash and I tried to get closer but he was really fast. Anyway I’m happy with two second place finishes, especially considering that I am not at 100% with my physical preparation at the moment, because the season is so long. I’m looking forward to the next round in two weeks in Russia.” 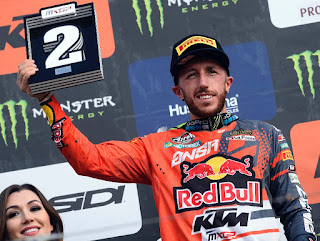