This weekend saw St.Jean d’Angely host the Grand Prix of France, round 10 of the 2018 MXGP season.

The classic hard and rocky track was in perfect condition for Saturday’s practice sessions and qualifying race that saw Tony Cairoli finish in third place after a solid heat, coming back from six place. Sunday the track was completely different due to the heavy rain that fell during the night, muddy and with deep ruts. In the first moto the KTM Red Bull Factory Racing Team rider picked the wrong gate and got stock in the mud, heading into the first corner out of the top five, before struggling to pass the riders in front of him on a track that was tricky and slippery. Cairoli pushed his KTM 450 SX-F up into third place and then set about closing the gap on second, putting in the fastest lap of the race, finally crossing the finish line just a few metres short of his target. His second start was perfect and Tony scored the hole-shot, flying over the track, and pulling a decent gap until mid race distance, when tiredness led to him making a few mistakes, thus depriving him from the heat victory. Still TC222 got the second place overall, for his ninth podium of the year. Last round of three in a row, is next weekend in Ottobiano, for the MXGP of Lombardia. 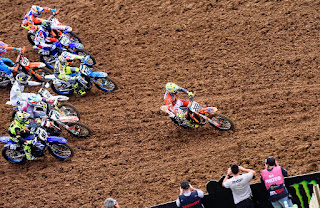 Antonio Cairoli: "I felt good even though I wasn’t at my best due to a sore knee that I picked up last week. It’s still sore and I couldn’t train during the week but thankfully we still managed to get on the podium, and that’s always our goal. In the first moto the track was a bit more challenging than the second, muddier and my start was not the best because I chose the wrong gate and I got stuck in the mud on the starting line. I was back in 10th and tried to come back as quick as possible, but I lost some time behind Coldenhoff and when I finally found a place to pass him it was already too late to catch Desalle for the second place. In the second moto I wanted to do my best to stay in front but I got very tired in the last 10 minutes and Jeffrey had a very good pace going. When I made a few mistakes in the final laps he closed in and passed me. At the the end of the day second place is ok of course, but we need to work at being competitive for the entire race period and hopefully we will be able to do it next week in Ottobiano." 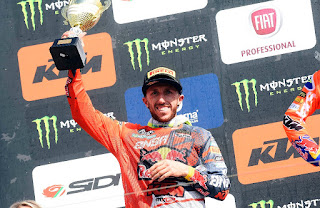