It was a hot and tough weekend for all the MXGP riders as the mercury hit 32° at a sunny and sandy Lommel, for the classic summer MXGP of Belgium. 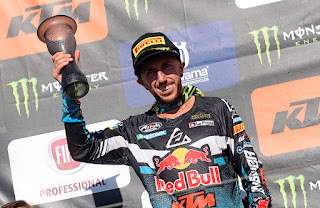 The fifteenth round of the series started well for Antonio Cairoli, who loves these kinds of tracks where he has forged some of his best memories throughout his brilliant career. After picking the second gate for the qualification race, in timed practice, the reigning World Champion got a decent start and rode the entire moto in third place before grabbing second on the last lap. In Sunday’s first heat the KTM Red Bull Factory Racing Team rider went well out of the gate and into the top five, racing to second place during the first lap, practically surfing on the deep sand, until the finish line. The second race was tougher and TC222 had to dig deep in order to snatch second place after the start. His lack of recent training in the sand, due to an ongoing thumb injury, didn’t help Tony in his search for victory, but did see the KTM 450 SX-F rider grab his thirteenth podium of the season, consolidating his second place in the standings. Next round will be hosted in two weeks time on the hard pack of Frauenfeld and will be the MXGP of Switzerland. 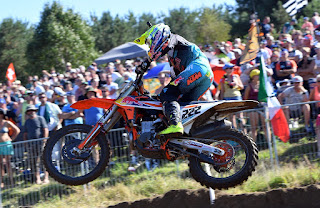 Antonio Cairoli: “Overall I have to be happy because I know that Jeffrey is always really fast on these types of track, and due to the damage to my thumb a few weeks back I haven’t been able to train properly in the sand. Of course I know how to ride on this type of track but I have to say that I just didn’t have any more to give, I was closer in the first moto when I had more energy but then that was that. Anyway two second place finishes is ok for sure, but we are getting closer to the end of the season and I need to keep it on two wheels and try for the wins because with five races left a lot can still happen. Next race is in Switzerland on a track that I really like and hopefully we will have a better result.”