The MXGP of France, hosted on the classic St. Jean d'Angely track, was not easy for Antonio Cairoli, who has never had a great feeling for the rocky terrain of the French hills. 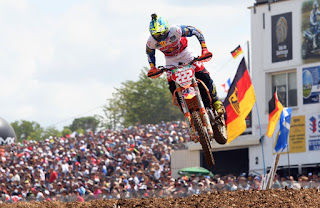 Eleventh in free practice he won the sixth gate for the qualifying race in the timed session. Unfortunately three corners after the start he went down due to contact with a rider who hit him from behind, while he was close to the top ten, restarting almost dead last after a rider literally rode over his left ankle. Making good progress, the KTM Red Bull Factory Racing rider qualified in fourteenth place, finishing in some pain due to the roost from the rear wheels of the riders he overtook. Sunday was a different story with Tony launching his KTM 450 SX-F out of the gate in the first moto, hitting the first corner in second place and keeping the position to the finish, taking home his 13th top three of the season out of 13 heats raced. The second race went badly from the start when the gate of many riders, including Cairoli’s, did not go down smoothly, compromising the result of his race. Last at the first corner, the red plate holder of the MXGP class pushed hard, fighting through the pack up to fourteenth place, before slipping in a rut and getting hit by an opponent dumped him back down into 26th. After a good second comeback, he again fell off the bike while he was seventeenth, recovering for the last time from twentieth to seventeenth come the flag, ending the French Grand Prix in seventh place with 26 points, leading the overall standings with 311. The next Grand Prix will be held in two weeks on the fast Russian track of Orlyonok. 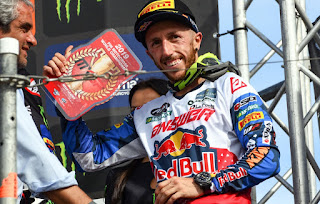 Antonio Cairoli: “Of course it was not our best day but we’re still positive and we’re looking at the improvements we made through the races. We were struggling all weekend with riding and yesterday crashing in the first lap of the qualifying race didn’t help at all. In that accident somebody ran over my ankle and today it was hurting, and as the track was so slippery it meant that I kept putting the foot onto the ground . Even worse was the gate situation, which in my opinion was quite unprofessional for a world championship track, with some gates dropping and some not. I’m a bit frustrated about that but now we’re already looking forward to the next race. Today we learned something and even though I’m almost 34 I’m still learning something new at every race. We will stay focussed and try to have fun at the next race and be back on the podium again.”
MXGP Race 1
1-T.Gajser 2-A.Cairoli 3-A.Tonus 4-J.Seewer 5-R.Febvre
MXGP Race 2
1-T.Gajser 2-R.Febvre 3-A.Tonus 4-C.Desalle 17-A.Cairoli
MXGP Grand Prix
1-T.Gajser 50p. 2-A.Tonus 40p. 3-R.Febvre 38p. 4-C.Desalle 33p. 7-A.Cairoli 26p.
MXGP Standings
1-A.Cairoli 311p. 2-T.Gajser 301p. 3-G.Paulin 218p. 4-C.Desalle 208p. 5-A.Jasikonis 190p.