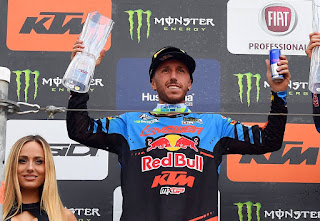 The reigning World Champion arrived in the Czech Republic with the left thumb, injured in Indonesia two weeks ago, in a worse condition than expected, having not been able to ride or practice on the bike until just a few days before the Czech round. Thankfully the KTM Red Bull Factory Racing Team rider was able to fight through the pain barrier during the weekend, taking a fantastic victory in Saturday’s qualifying race. Dealing with his out of sorts hand on the tricky and slippery hard pack of Loket, Cairoli pushed his KTM 450 SX-F to the limit, grabbing another two hole-shots, on his way to taking two second place finishes for a fantastic second overall, consolidating his second place in the standings, 30 points adrift from the lead, with six rounds left to run. Next round of the MXGP is in two weeks time on the hellish sand of Lommel, for the MXGP of Belgium. 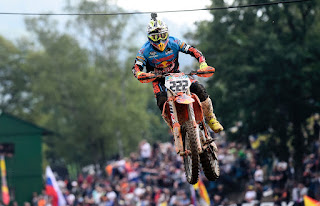 Antonio Cairoli: “I feel good with this second overall because this weekend was really difficult for us, I found out that I had two fractures on the left metacarpus and the thumb is not fully healed yet, giving me a lot of pain. Anyway I decided to ride without pain killers so as to avoid the lack of feeling and the possibility of causing further damage. In the first moto I started at the front but I made a small mistake, losing the lead, and then I didn’t want to take too many risks so I mostly avoided as many problems as I could on what was a very sketchy track with strange bumps. In the second heat I was more motivated, so when Herlings passed me, after my second hole-shot, I was able to follow him for five or six laps. My thumb was in agony, so I upped my lap time from 1’45” to 1’49”, allowing me to stay where I was until the end. Now I’m really looking forward to another week of rest to try and heal up because the next round is in Lommel, a track that I really like and where our target is to be again on the podium, possibly on the top.” 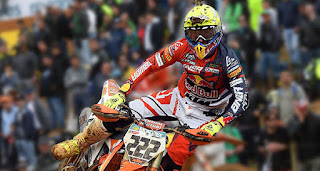