Born in Vercelli from family in difficult economic conditions at age 11, April 5, 1904 was entrusted to the then local ' hospice for the poor. " After only three years , in 1907 he was admitted to demonstrated propensity , daytime courses goldsmith at Borgogna School of the same city . Will follow up to 1910 learning chemistry prof. Eugenio Castelli , the plastic by Francesco Porzio , author of valuable monuments , drawing from the master Dolphin Alciati , engraving and jewelry by Camillo Zucca and chisel by Giuseppe Martina. 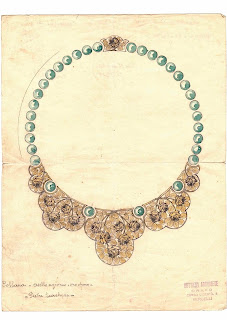 The Administration of the School itself , given the considerable achievements of the student, together with the Savings Bank of the place, supported him until April 1911, when he left home to attend the Politecnico di Torino , 3 months school style prof. Vacchetta.In November 1911 , again through the support of the two aforementioned institutions , he left for two years of training in Paris. 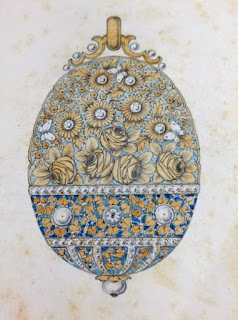 In the French capital he was employed at a leading jeweler and engraver who settled there in Piedmont for many years : Joseph Gillio . During his stay in Paris he had the opportunity to experience shorter in other goldsmiths and study the high jewelery exhibited in the shops of the Rue de la Paix and wonderful museums. The sample was , as he himself loved to tell then saying " Confused and humiliated in front of such mastery ," the chisels Morel Ladeuil , ponds Brateaux and gems Lalique . 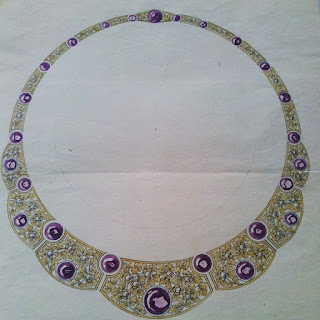 At a distance of about nine years since his return to Vercelli , in 1922 he exhibited at the Art Exhibition Vercelli some works of jewelry art that met with great commercial success. In 1923 he was awarded the silver medal by the jury of the International Exhibition of Decorative Arts in Monza, known as the " First International Biennale of Contemporary Decorative Arts " , prized for works consisting of two rings and a bracelet . 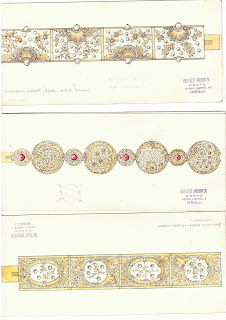 Note its delicious glazes, its branches with leaves and flowers to dress up the precious gems , his skilful chisel.In addition to the classic creations of jewelery such as rings, brooches, bracelets , worked in frames , monstrance,cribs, swords. The projects were required to be deleted and the banner of the Ospedale Maggiore S. Andrea . He worked until old age of ecclesiastical commissions , civil and military. The major works were commissioned also by the Royal House of Savoy. One of his most important works of Vittorio Emanuele III , a pocket watch Solid gold double finely chiseled chest and studded with emeralds , was not to ups and downs, never acquired by the sovereign and remained the property of the goldsmith representing his more precious personal possession until his death. 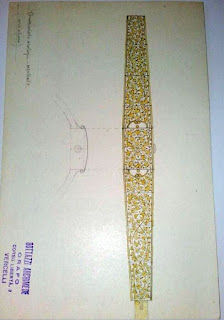 Private person and a practicing Catholic , he showed special devotion to Our Lady of Lourdes and the annual pilgrimages to the cave. He died suddenly in Vercelli in the early seventies , leaving no children , united in a deep affection Mariuccia Rinone which in turn will fail , crushed, a few weeks after his death. 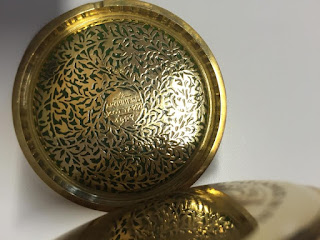 Archimede Bottazzi, great goldsmith Piedmontese of the twenties and thirties, lives again in the drawings provided by the Valenza colleague Gianfranco Quartaroli. The latter decided, in fact, to remember the work of Bottazzi through substantial private collection of 700 watercolors of the master engraver Vercelli. Quartaroli, who patented jewelry forms of Formula 1 and MotoGP circuits, wants to pay tribute to the goldsmith tradition of Piedmont.
Etichette: Archimede Bottazzi engraver goldsmith made in Italy vintage