The Grand Prix of the Pays de Monbeliard, last round of the 2017 MXGP World Championship, took place this weekend on the hard pack of Villars sous Ecot. The track, last visited in 2015 was affected since Saturday by heavy rain showers that made the soil tricky and slippery. 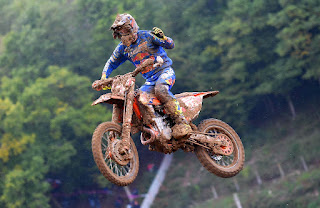 The ninth time World Champion, Tony Cairoli, fresh winner of the 2017 World title came in to the last event of this amazing season with the aim of taking back home the best result possible, having scoring so far 12 podiums of witch six were victories. Ninth of the timed practice session, Tony had a pretty difficult start of the qualifying moto, turning out of the thirty at the first corner and passing twenty at the first lap. 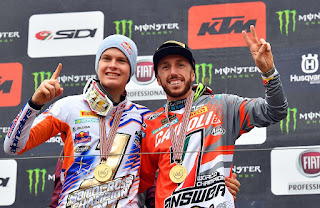 Pushing his KTM 450 SX-F trough the ruts and the mud of the French circuit, Cairoli managed to finish in 13th. place. Sunday the track was even more demanding than the previous day, with heavy rain fallen during the night and the morning before the two heats. First start was not easy for the KTM Red Bull Factory Racing Team rider, who went at the first corner with caution, in order to avoid a crash, out of the top ten. After a difficult but solid remount, while he was going for the seventh place, he had a little crash that put him back in ninth, what will be his final place at the end of the moto. Second start was way better, with the Sicilian in the top ten place, going fast to the fifth while another little crash put him down again. Antonio hurt his left knee and preferred to get out of the race to avoid worst problems continuing ride, two only weeks before the Grand Prix of the Nations. Luckily the examinations made later didn’t show any damage and there will be no consequences for the Italian.

Antonio Cairoli: "I’m very happy about my season, we worked hard to win the world and we made it. This was our goal since the beginning of the season and we followed our programs. We finished the season a little bit on a down but it was on the plan because we had a huge gap that we could do it, limiting the risks. Now we are already looking forward for the next season, because we know where we can improve. We will make some test with the bike, that it has been great this year but that can still be developed. Here in France it was really tough with weather conditions and also because my physical conditions after a week of celebrations were not at the top, anyway it’s important also to do it in the right way and to enjoy when you get to your goals. Now the focus is for the Motocross of the Nations, in two weeks, where we will try to take Italy back on the podium."
Race 1
1-T.Gajser 2-R.Febvre 3-J.Herlings 4-M.Anstie 9-A.Cairoli