The sandy track of Jacksonville, Florida, today hosted the seventeenth round of the MXGP 2017. Hot temperatures and heavy humidity were what welcomed the European riders for their last oversea event of the year, on an unknown but well prepared track, situated 20 kilometres west of Jacksonville. The American round was the first of the final three races that will close out the Motocross World Championship and for Tony Cairoli was the first of three championship match points that he has in hand. The KTM Red Bull Factory Racing Team rider started timed practice with a good pace and gained the second gate for the qualification heat, which he finished in second place, after leading for almost half the race, on a track flooded by heavy rain fallen in the previous night. Sunday the sun was back on the track and immediately the temperature and humidity grew, adding another unwelcome obstacle to the track for the riders. 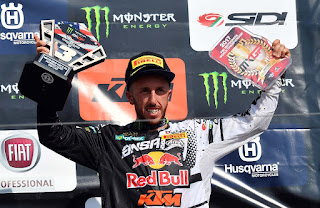 Cairoli didn't get the best jump out of the gate in race one and was outside of the top 10 at the first corner. His ride mid pack didn’t last long and together with his fellow team mate Herlings they steamed through the competition, with TC eventually finishing in third. In race two his start was way better and with his KTM 450 SX-F Tony took a fantastic hole-shot, taking the lead on Herlings and leading the group for the first 24 minutes, before a little mistake put him into the dirt and relegated him to second place come the flag. With third overall this is Tony’s twelfth podium of an incredible season, that see’s the next act play out in seven days’ time in Assen, for the Grand Prix of The Netherlands. 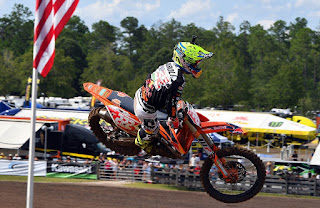 Antonio Cairoli:“I’m always happy to be on the podium because it’s so important to be consistent throughout the season, and this has been one of my most consistent ever. I did my very best to win today, because I want to end this fight for the championship as soon as possible, so that I can have some fun in the last few races battling with Jeffrey without the pressure of the title race hanging over me. At the moment I’m riding very carefully to avoid any injuries, and my physical condition is dropping a little bit because I started the season so strongly. Now we look forward to Assen next week, a track that I really like, and where I hope to win the title in the first moto. If I can get that job done then I can relax for the second and hopefully put on a good show for the spectators. I’m also really excited to race at Matterley Basin for the Motocross of Nations to see how we can do with team Italia!”