After the five month long stop the MXGP is back on track to resume the season interrupted in Valkenswaard at the beginning of March. 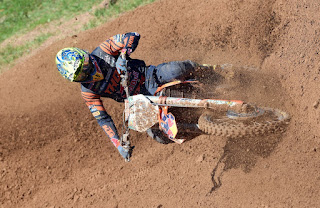 The first of the three Latvian rounds was held today on the Kegums track, about fifty kilometers from the capital Riga, where the next two rounds will also be held on Wednesday 12th and Sunday 16th of August. The new anti Covid protocol provides for an unprecedented race program that engages the riders between free practice, timed practice and race heats, from the morning to the afternoon, concentrating all the commitments on the track in a single day. Feeling immediately comfortable on the fast sandy track, Antonio Cairoli scored the ninth time in free practice, confirming his position in the next timed session. At the start of the first moto, the rider of the KTM RedBull Factory Racing team didn't had the best jump out of the gate and went out of the twenty at the first lap but managed to make a great comeback ended in seventh place after 17 laps, showing an excellent physical condition and a great race pace. The second start went better but Tony ran into a rider who crashed at the first corner and in an attempt to avoid him, was hit by the bike of another rider on the right leg. Restarted at the end of the field, he tried to recover but crashed again while overtaking, clearly feeling the pain in his right knee. At that point he made his best to bring his KTM 450 SX-F to the end of the moto, in the best possible position, finishing in seventeenth place, for a thirteenth overall, which give him the fourth place in the championship standings. TC222 will do everything with its staff to be ready to face the next race, despite having only two days of rest.

Antonio Cairoli: “Today was very tough. The restart of everything after five months meant it would be tricky because we didn’t know the pace but I knew I had trained well and could do good. The only problem was my starts and we saw it at this track where it is difficult to come through the pack. In the first moto I touched [Arnaud] Tonus and we were both outside of the top twenty. I felt really good to come back to 7th and was happy. I was determined to do better in the second moto and was thinking about going for victory to be honest. I had a better start but I was near Tonus again and he crashed. I had nowhere to go and tried to turn a bit tighter but another guy hit me from the inside. I twisted my knee again. I was not feeling 100% at the beginning of the race and was taking it easy but made another mistake and was outside the top thirty. After that I tried to re-group and bring it home. This is not the result we wanted but I saw a lot of people had troubles this first race. We won’t panic too much but we want to be further forward. I want to get behind the gate again and prove that I can get there. It is so important lately to be at the front at the start. We need to work a bit more on this direction.”