For the first time since eight years the FIM Motocross World Championship started in Europe and this time it was Matterley Basin, close to the city of Winchester, to host the opening round of the MXGP’s new season. 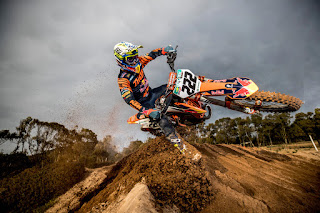 The difficult weather conditions and the wind storm that affected the British hills, between Friday evening and Saturday morning, caused the change of the program and the cancellation of the qualifying races, reducing so the time on track to 30 minutes only during the entire day (10 minutes free practice + 20 minutes timed practice). Third on the starting grid, with Saturday’s third best lap time, Antonio Cairoli had a good jump out of the gate but had to deal with some traffic at the first corner and crossed the first lap finish line in fifth place, resuming in to fourth after two laps and passing under the checkered flag in fourth place after thirteen laps. With another good start in the second moto, the KTM RedBull Factory Racing Team rider took the second place at the beginning of the moto, fighting till the end, conquering with his KTM 450 SX-F the third place of the heat and the third overall, witch is the 166th. Podium of his career, becoming the rider with more podiums ever in motocross alongside with Stefan Everts. The Grand Prix contingents will head now to The Netherlands for the second round of the MXGP 2020, that will be held on Valkenswaard's black sand in seven days.
Antonio Cairoli: “It is nice to be back on the podium after so many months without racing. My shoulder has improved a lot in recent weeks but last week in Belgium I twisted my right knee and heard a crack. I thought ‘the season is finished already’. I went to the doctor and he confirmed a second-degree PCL tear. I taped the knee very hard yesterday and today and all the ruts out there were not helping. I just need to work as much as possible on the muscle to make it as stable as possible. So to be on the podium at this track and these conditions is amazing and I’m motivated again to work really hard and try to build it up. We will see what we can do next.”
Race One: 1-J.Herlings 2J.Seewer- 3-M.Evans 4-A.Cairoli 5-C.Desalle
Race Two: 1-T.Gajser 2-J.Herlings 3-A.Cairoli 4-G.Paulin 5-C.Desalle