The eleventh Grand Prix of the year was hosted today on a hot and sandy Ottobiano track, 50 kilometres south of Milan. 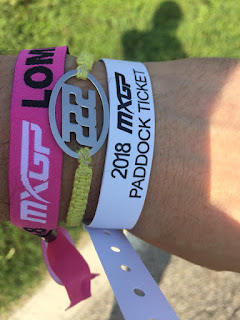 Tony Cairoli, for the second year in a row, scored a double victory at the MXGP of Lombardia, taking home a cool 50 points and cutting the gap between him and the red plate to just 12 points, with nine rounds to go. 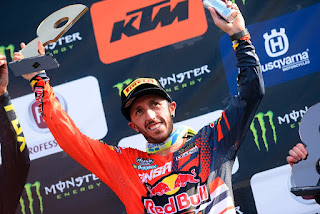 The KTM Red Bull Factory Racing Team rider had to work a bit harder than he hoped, both in Saturday’s qualifying race, when he recovered from last to seventh after a crash on the first lap, and in Sunday’s second moto, when he came back from fifth to first place, after a mistake, while he was leading the race for the second time on the day. TC222, who has always had a special relationship with this track, took his KTM 450 SX-F to victory in the opening heat of the day, leading form the first corner to the finish line. A mistake in moto two made things a little more challenging but the result was the same as Tony took the chequers once again. It was a great weekend for Cairoli who took home the full compliment of points for the second time this year, scored the 85th victory of his career and celebrated with his team mate Jorge Prado an astonishing double victory in MXGP and MX2 for the De Carli Team. Next round of the MXGP in 14 days on Indonesian soil of Pangkal Pinang. 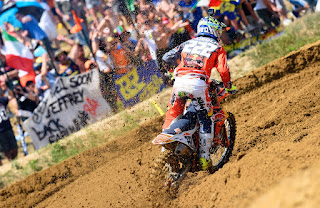 Antonio Cairoli: “Overall it has been a good weekend, yesterday the qualification race was quite tough and after a bad start and a crash I had to push really hard to come back, leaving me pretty tired. I knew that today would be even worse with higher temperatures, a rougher track and 10 minutes more at every moto. In today’s first moto I had a good start and I could put in some fast laps at the beginning, increasing my lead and managing to control the race until the end. In the second moto I tried to pull away at the front again, but on the second lap I crashed, going back to fifth. I regrouped, put in some good laps, some quick passes and took back the lead, along with 50 points that are vital for my championship hopes. Now we are looking forward to Indonesia for the next two races, where again it’s going to be hot. I like it like that and hopefully we’ll be up there on the podium again, which is always our goal. It’s always fun to race in Italy, it’s really emotional because they are cheering a lot and I’m proud of them.”
Race 1
1-A.Cairoli 2-C.Desalle 3-M.Anstie 4-G.Paulin 5-R.Febvre