In the wake of last week’s victory at the opening race of the season, the 9 time World Champion continued his march towards the first GP of the season as he competed at round two of the Internazionali d’Italia in Noto, Sardinia. On the hard and unforgiving soil of the hill that rises in front of the little Sicilian town, Cairoli took the fastest lap time of the morning free practice session before following it up with second in the timed practice. When the gate dropped at the start of MX1 Tony started perfectly, launching his KTM 450 SX-F out of the starting gate at the front of the field. After 12 laps in the lead and after posting the fastest lap of the race, things turned sour when, after becoming frustrated with a lapped rider, TC was passed, finishing the race second a few laps later. At the start of the Supercampione race the KTM Red Bull Factory Racing Team rider went out of the gate in third, grabbing first place after two laps, putting a good lead over the chasing pack and controlling the race until the finish line. The Sicilian leads both standings, with a 40 point lead in MX1 and 60 in the Supercampione. Now, after the first two races, we return to the continent for the final of the Internazionali d’Italia MX SDV series on the sandy track of Mantova.

Antonio Cairoli: “We are very happy, it was a great event in front of a very large crowd. Everything went well on a very demanding and marked track, on which it was easy to make mistakes. For this reason we took it very careful in race one, then Febvre took advantage of a lapped rider to pass me, keeping the lead until the end. In race two I started well, at the front with the top riders and then I managed to take the lead and pull out a gap, keeping a good rhythm up to the finish line. We are happy with how this season has started and today it was important to avoid unnecessary problems, which we did, bringing home a good result. Next week we will be in Mantova for the last round of the Internazionali and then we will fly to Argentina for the first round of the MXGP.” 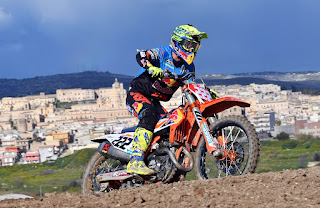