Tony Cairoli helps Italy to get seventh overall at MXoN

The 2017 Motocross GP season officially closes at Matterley Basin, England, at the track that hosted the 71st Motocross Grand Prix of the Nations. The spectacular track, housed in a grassy valley just a few miles from Winchester, saw 38 nations line up in the battle to win the Chamberlain trophy. Antonio Cairoli (MX1), captain of the Italian national team, led the "Azzurri" squad in its search for a decent placement, along with team mates Michele Cervellin (MX2) and Alessandro Lupino (Open). Having finished third in the MXGP group qualifying race on Saturday, the KTM Red Bull Racing Team rider had more troubles than he expected on Sunday, having to deal with two difficult starts. In the first race, MX1/MX2, TC222 crashed after just a few corners whilst fighting for third, recovering to 11th by the flag. In the second race, against the Open class, he started from pretty much dead last before clawing his way back through the mud to come home seventh. The Italians returns from England with seventh overall, a place that doesn’t fully meet the expectations the team. 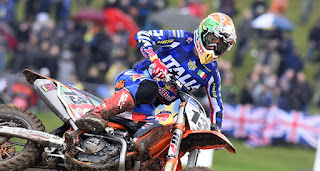 Antonio Cairoli: “The Nations is a special race but unfortunately the muddy conditions made everything really difficult for us. It was a real shame for Matterley Basin that so much rain fell between yesterday and today, because it is one of the nicest tracks that we have, and if the weather had played its part then the crowd would have been much bigger. However, there is always a nice atmosphere at the Nations, especially here in UK with its great motocross fans, and even with the muddy conditions the public were treated to some great racing.

Unfortunately for team Italy today we suffered with the starts; in the first race I crashed as a result of contact with Paulin who suddenly changed trajectory right in front of me, and in the second race I started pretty much dead last, coming back up to seventh place. As a nation we have only been able to finish seventh, a result that is below all of our expectations. However with that said we all gave it 100%, so even if we are not happy we are satisfied, knowing that we gave it everything we had. Alessandro had a great race in the Open class, ending fourth overall and getting the best result for our team, while Michele had a difficult day due to the fact that he is struggling with an injury. Now that the season is over we can take some well-earned days off the bike before starting to prepare for next season!” 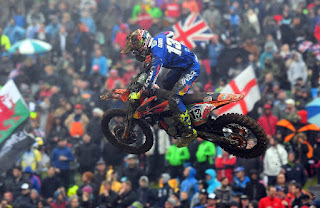