Fourth podium in a row for Cairoli

It was an amazing weekend for the KTM squad, placing six of their riders on the podium at the Grand Prix of Belgium, the fourteenth round of the MXGP 2017. On Lommel’s infamous “sands of Hell” the Austrian manufacturer went 1-2-3 in both the MX2 and MXGP class. Antonio Cairoli, winner of the last three rounds of the series and leader of the Championship, went third in timed practice and managed to finish second in the qualifying race, on a track flooded by Saturday’s heavy rain. Under the bright Sunday sun Tony had a brilliant start, grabbing with his KTM 450 SX-F the hole shot and entering into a fantastic duel with his team mate, Glen Coldenhoff, who passed him after the first corner. 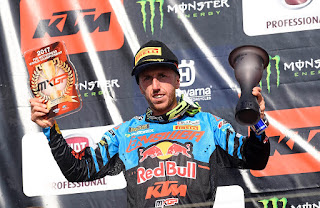 The Sicilian lost another position but soon found his rhythm and got back to second place, where he and Coldenhoff battled it out behind Herlings. With Coldenhoff taking advantage of a small crash by the eight time World Champion, Tony reeled him back in and passed to finish the moto in second. In the second moto TC222 took his second hole shot of the day and tried to pull a gap, but Herlings had the greater speed and soon put a pass on him. The battle was epic, with Tony scoring the best lap time of the race as he closed down and passed his fellow team mate, regaining the lead. Herlings passed him back after seven laps and Cairoli decided to avoid all sort of risks, managing the huge gap he had over third and passing under the chequered flag in second for a second overall. The KTM Red Bull Factory Racing rider now has an extended lead of 99 points, with five Grand Prix left until the end of the season. Next race is in 7 days on the Frauenfeld track, in Switzerland. 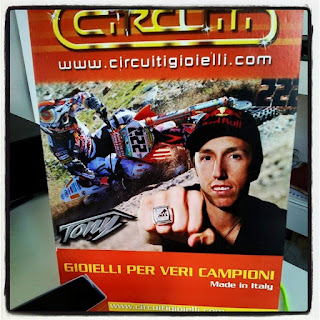 Antonio Cairoli: “It’s amazing to see how this Grand Prix panned out today, I don’t think that six KTM’s have ever filled the podium of both classes. It’s amazing what this manufacturer is bringing to the sport and I’m really happy to be a part of this brand. I want to congratulate all of the people who are behind this success story, as well as my two team mates for the great battles we had out there today on what was a very rough track. Fighting with Jeffrey, who is one of the fastest guys on this kind of soil, was fun and I enjoyed it a lot. I had a good race going with him and my team mate Glen during the first race, but right now I need to be looking at the points and I didn’t want to get into any crazy stuff as the end of the season is not far off! Jeffrey was definitely more motivated than me to win here as I need to be looking more at the bigger picture. For me it was more important to increase my lead in the championship than try anything silly going for the win. I’m looking forward to the race in Switzerland next weekend, on one of my favourite tracks where I won last year, because I have a lot of Italian and Swiss fans who will for sure come over there to see some good action.” 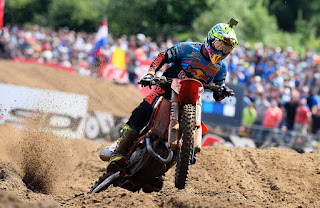