The ninth round of the 2017 MXGP series was held today in France, on the hilly circuit of Erneè. A classic “old school” track, steeped in history, that’s physically very demanding on the riders due to the high temperatures and consequent humidity. 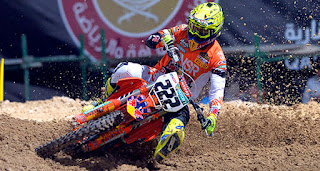 After finishing third in free practice and then fifth in the timed session, Tony grabbed the hole-shot at the start of the qualifying race. A red flag situation demanded a restart of the race with TC finally crossing the line in sixth. In Sunday’s first race Cairoli started second but grabbed the lead within a couple of laps. Unfortunately a few small mistakes allowed a rival past, relegating the Sicilian to third. During the heat he found a good rhythm aboard his KTM 450 SX-F and started apply pressure on the man ahead. 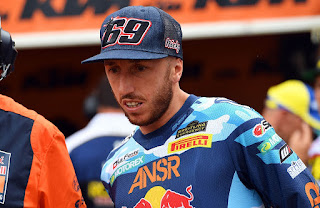 With two laps to go the rider in front crashed out, handing TC a hard earned second place. In the second heat the KTM Red Bull rider nailed the hole-shot and tried to put some distance between himself and the charging pack, but after a few laps was caught and passed, eventually managing to cross the finish line in third place. His haul of 42 points was enough for 2nd overall, only one point from the GP win, and increases his series lead to 50 points. In today’s Grand Prix Tony surpassed the milestone of 8,000 championship points in his career! The tenth round of the MXGP will be in two weeks at the new venue of Orlyonok in Russia. 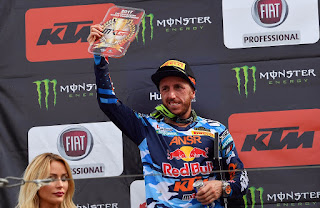 Antonio Cairoli: “I’m not so happy about my weekend, I seemed to struggle all the time, with myself, with my riding, with my lines…pretty much everything. I had two good starts and I was leading in both motos but then in the first part of each race I messed up and lost some positions. I’m not super happy about that but it is what it is, I’m on the podium and that’s what’s important for the Championship, to be up there with as many points as possible and that’s the positive side of this race. 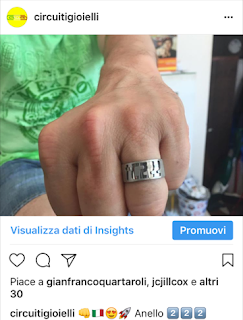 At the beginning of the second moto especially I was dropping a little bit, then I found a good rhythm and with fifteen minutes to the end I was close to second place. After all the hard work I then stalled the bike on an up hill and I lost 5/6 seconds! After that I was very tired and also the guy behind me was very close so I didn't want to make any more mistakes and I secured the third. Second overall was good enough, even though I really wanted to win here but this time it was just not possible. Anyway it’s good for the Championship, even if it’s a bit early in the season to be thinking about the standings. At the beginning of the week we received the terrible news of Nicky Hayden, that’s the reason I was wearing his cap on the starting grid today. Jill and I want to send to Nicky’s family and fiancé all our thoughts.”
Race 1
1-M.Nagl 2-A.Cairoli 3-J.Van Horebeek 4-C.Desalle 5-J.Herlings