There are certain victories that make history and will be remembered forever as some of the most amazing of all time. Tony Cairoli's seventy-ninth is sure to be one of them. A nearly perfect weekend began with a fantastic victory in Saturday's qualifying race. 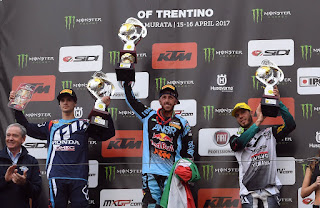 The Red Bull KTM Factory Racing team rider managed to thrill the thousands of fans crowded in the shadow of the Dolomites as he put on an electrifying performance, riding with incredible emotion in front of his adoring home crowd. Grabbing the holeshot in Race 1 Cairoli had his work cut out as Gajser quickly put a pass on him on the first lap, with Tony almost immediately passing the Slovenian back as the two went tit for tat. With a slender lead Cairoli kept cool under pressure, managing to maintain his advantage for the entire race and collect the race win. In Race 2 Tony got out of the gate well before going down at the second corner, restarting twenty second, on a track that's well known for being difficult to pass on. This prompted an amazing comeback, which began the moment he hit the dirt! Pushing his KTM 450 SX-F to the absolute limit TC222 passed almost 20 riders as he closed up an almost 15 second gap between himself and the head of the race, clocking stratospheric lap times and showing an inexhaustible grit during his romp toward the front. With the public of Arco di Trento in raptures, Antonio Cairoli passed under the checkered flag in second position, winning for the third time in five editions the Grand Prix of Trentino and once again flying the Italian flag from the highest yardarm of the MXGP podium. In the standings the eight times World Champion sits in second, eighteen points from the lead. Next meeting with the MXGP is in seven days in Holland for the European Grand Prix. 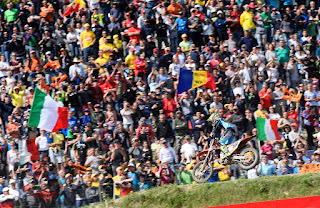 Antonio Cairoli: “I feel great, my condition is very good and I felt really comfortable on the bike, despite the fact that this track doesn't have my favourite type of soil. The second moto today was pretty fun, I was second off the start but then crashed at the second corner and I was hit by loads of riders, I was pretty pissed off with myself because I did the mistake. After quickly remounting I told myself that I desperately needed a podium finish, so gritted my teeth and pinned it. I rode the best I have in a long time, making passes all the way from twentieth up to seventh. Once there I could see the group ahead and was pretty sure that I could close them down fairly quickly. I soon realised that I had a chance to pass Bobryshev for second and the overall, so I just put my head down and went for it! I’m happy because my physical condition was good from the first till the last lap and I was able to push all the way. I just kept pushing and pushing trying to make passes and it worked, I’m really happy! I had some sketchy moments but if you want to win you have to take some risks. It’s a very special race, one of my best GPs ever! I look forward for the next race in Valkenswaard, because the time to push has come and I’m more than ready to do it.” 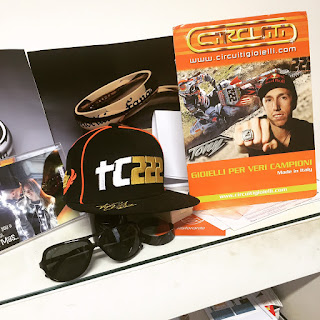